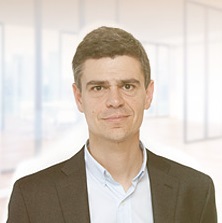 David El Sayegh is the Secretary General of Sacem, a position he has held since April 2013. He is a trained lawyer specialising in intellectual property, and first practiced his trade at the Coulié & Coste-Floret cabinet for five years. He then joined Sacem and its Internet, Media and Rights Collections department for six years. In September 2007, he joined the National Syndicate of Phonographic Publishing (Snep) as its Legal Affairs Director, and became its General Director from 2009 to 2013.