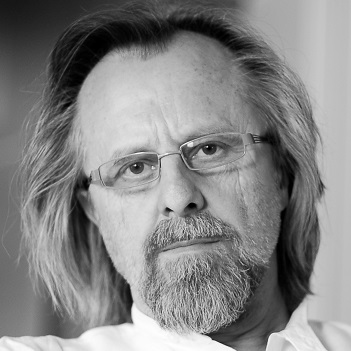 Jan A. P. Kaczmarek is a composer with a tremendous international reputation that continues to grow. As a successful recording artist and touring musician, Jan turned to composing film scores as his primary occupation.
Jan’s first success in the United States came in theater. After composing striking scores for productions at Chicago’s Goodman Theatre and Los Angeles’ Mark Taper Forum, Jan won an Obie and a Drama Desk Award for his music for the New York Shakespeare Festival’s 1992 production of John Ford’s “Tis Pity She’s A Whore,” directed by JoAnne Akalaitis, starring Val Kilmer and Jeanne Tripplehorn. Newsday wrote that Jan’s score “undulates with hypnotic force that gets under your skin,” while Frank Rich of the New York Times found it worthy of the films of Bernardo Bertolucci and Luchino Visconti. Educated as a lawyer, he abandoned his planned career as a diplomat, for political reasons, to write music in order to finally gain freedom of expression. First he composed for the highly politicized underground theater, and then for a mini-orchestra of his own creation, “The Orchestra of the Eighth Day”. The major turning point in his life, he says, was a period of intense study with avant-garde theater director, Jerzy Grotowski.
“Playing and composing was like a religion for me,” Kaczmarek explains, “and then it became a profession.”
“The Orchestra of the Eighth Day” began touring Europe in the late 1970′s and to date, has completed eighteen major tours. They appeared at the Queen Elizabeth Hall in London, the VPRO Radio International Contemporary Music Festival in Amsterdam,the Venice Biennale, and the International Music Festival in Karlovy Vary, Czechoslovakia, where Jan won the Golden Spring Prize for the Best Composition. He is a five-time winner in Jazz Forum’s Jazz Top Poll. At the end of the Orchestra’s first American tour in 1982, Kaczmarek recorded his debut album, Music for the End, for the Chicago-based major independent Flying Fish Records.
Jan returned to America in 1989 to find a label for his latest composition for the Orchestra. Jan stayed in the United States where he expanded his horizons by composing for theater as he had already done in Poland with great success, capped by two prestigious New York theater awards in 1992. Having also composed music for films in Poland, he focused his attention to that medium, achieving recognition as a film composer with scores to such films as “Total Eclipse”, “Bliss”, “Washington Square”, “Aimée & Jaguar”, “The Third Miracle”, “Lost Souls”, “Edges of the Lord”, “Quo Vadis” and Adrian Lyne’s “Unfaithful.”

J.A.P.K. also won The National Review Board’s award for Best Score of the Year, and was nominated for both a Golden Globe and BAFTA’s Anthony Asquith Award for Achievement in Film Music. In addition to his work in films, Jan was commissioned to write two symphonic and choral pieces for two important national occasions in Poland. “Cantata for Freedom” (2005) to celebrate 25th anniversary of Solidarity movement, and oratorio “1956” (2006) to commemorate 50th anniversary of bloody uprising against totalitarian government in Poznan, Poland. Both premiers were broadcast live on national television.

Jan is also setting up an Institute inspired by the Sundance Institute, in his home country of Poland, as a European center for development of new work in the areas of film, theatre, music and new media. The Institute website (currently under construction) is: http://rozbitek.org. It is anticipated that Rozbitek will begin accepting students in 2007.
Jan is the founder and director of the Transatlantyk Festival, in Lodz, Poland.